I have always disliked Barbies. In fact, for my 5th birthday, I clearly remember getting two Barbies and I didn't care for them at all. I always loved dolls and stuffed animals, but Barbies were not my thing. When Alei was little, I had no intention of buying the disproportionate plastic dolls for her, but once all her friends had them, it wasn't worth the fight. Alei, Moriah and Alyssa all played with Barbies for years. The basement at our old house had a playroom that was usually littered with small plastic Barbie shoes and an occasional decapitated Barbie head. I sucked up many a Barbie item with the shop-vac over the years. When we moved to our temporary home over four years ago, the Barbies all moved into the barn due to space shortage. Occasionally they would play with them in the barn loft, but overall they have just collected dust for the last several years.

Since Julia went to a friends house and played Barbies, she has brought them up several times. I don't let her play in the barn loft since I'm concerned she'll fall out the door, so it meant that the Barbies once again were going to litter my playroom floor. Actually it's worse than that since Tori and Julia are semi-scared of the basement. The Barbies are going to litter the girl's bed-room and spill out into the living room. So, last night, we hosted scrub the Barbies, the Barbie cars and the Barbie airplane in the driveway. Julia was pretty thrilled with the whole event. With the barn collection I just cleaned, I see no reason to donate any more money to the Barbie billionaires. 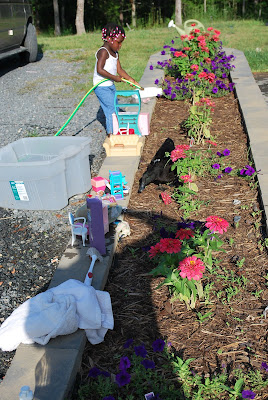 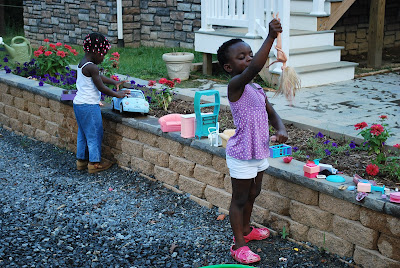 My favorite part of the cleaning event is when two of the ducks showed up and snatched a plastic Barbie item and tried to run with them. We chased them to get it back so they wouldn't choke on it. While Ben was in hot pursuit of the one duck, Tux waddled by with something on the edge of his mouth. I chased him down and pulled this item out of his throat. 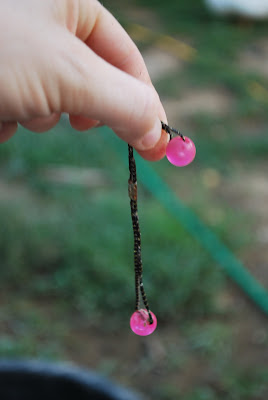 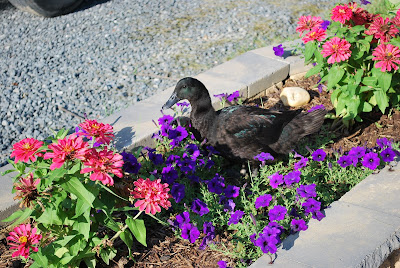 It seems a stretch to consider our land a farm these days as I've gotten rid of the goats and now I'm phasing out the ducks. We'll have nothing but dogs, cats and chickens for a while. As soon as we get our field fenced, we are going to get a dairy cow and a few pet goats, and then it will seem more "farmish" to me. Things are still progressing though. Last year, and the three years before that, we had literally no grass and this year it seems to be coming in and thickening up some. Although there are still bald patches, there is enough that JD actually mowed it for the first time with the bush-hog that we bought off the side of the road at least a year ago. 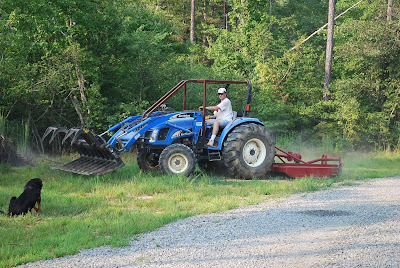 The area in this shot was our old front yard. Last year, when we moved the house, there was no grass, but amazingly it's growing this year. 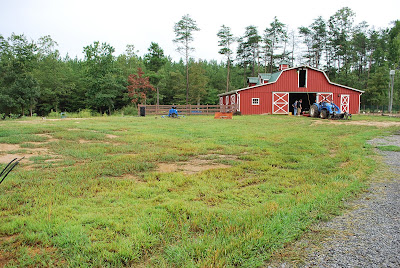 Here's my beloved ducks that leave for their new home on Monday. 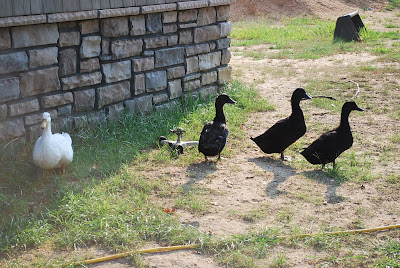 The only reason they are leaving at all is because they don't grasp the concept of stay off the patio, or even please don't poop on the patio. They have acres to roam and two baby pools to swim in, but they insist on pooping all over the patio each and every day. Even though I hose it down everyday, it's never clean enough to let Elijah down on it. See those spots? This was taken not long after hosing the whole thing down! 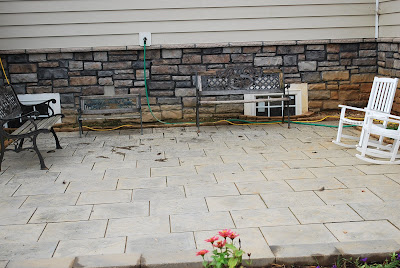 Here's the advantage of not having goats this year; I've been able to plant flowers and vegetables and nothing has eaten them. 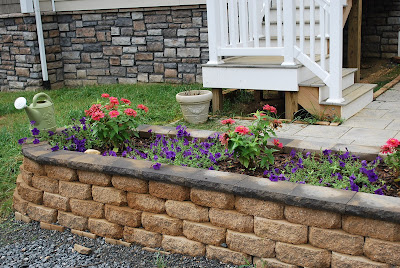 Today we took our second to the last load of wood to the Amish saw-mill. It's all from the path that the utility company cut down to put lines into our rental home. Although it's been a lot of work to get it out of the woods, load it, drive it, pick it back up and stack it, we have plenty of cut boards for our cow fence. Here's the new trees going...... 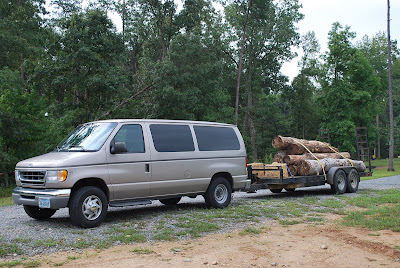 the kids running at the Amish saw-mill - 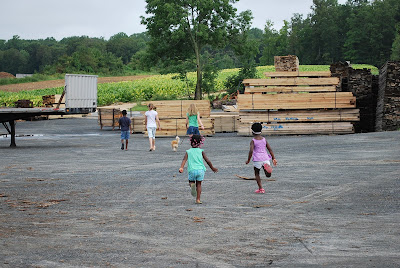 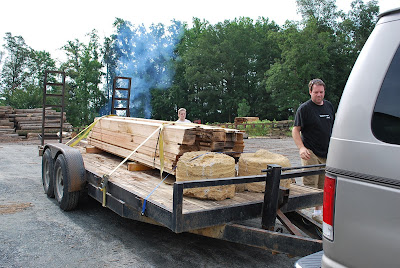 The fun part about our trip to the Amish today was talking to a carpenter about making a big A-frame swing-set for the kids. There is fierce competition for the two swings on our Costco playground, so I inquired about just just a basic frame with four more swings. He is going to give JD a price quote next week.